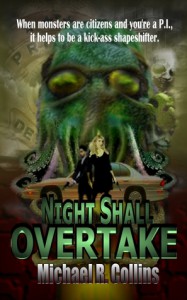 Night Shall Overtake by Michael R. Collins is an urban fantasy, set in a world like our own but full of supernatural creatures (there are no vampires, thank goodness.) The protagonist is a detective with special powers. What starts out as a standard case turns into more than this detective and her coworkers bargained for.

I received this book in the Lovecraft ezine winter sale. I was not drawn in by the cover, which I don’t think does the book justice. When I started reading and saw that it was about a detective that solves supernatural mysteries, I assumed it would be a Harry Dresden knock-off. I kept reading, anyway. And kept reading. The story and writing sucked me in and couldn’t stop reading until the end!

Many of the creatures found in Night Shall Overtake are familiar: demons, lamia, shades, and boogeymen. A new monster is introduced in this book: a Ry’leth. The Ry’leth is a creature that starts out as humanoid Cthulhu-thing and then grows up into a big insanity-inducing nightmare.

The protagonist, Twila, is a woman. Her sidekick is a gay man. Her other sidekick is a black man. That’s different than your average horror character set. These facts were pointed out and neutral; I didn’t feel that the author was beating you over the head with the fact that he was adding some diversity to the mix as if to win some politically-correct brownie points.

Overall, the character development was pretty basic, but it worked fine in the context of the book. I was skeptical of the lead character being a woman since the story seems to be written by a man, but I actually liked Twila. While the character was more masculine than your typical woman, I do know a few women who are like her.

There is some graphic sexual content in this book. I usually enjoy sexuality in weird fiction the way good Lovecraft wrote it; so repressed you need a shovel and a psychology textbook to unearth it. However, the sexual content in this book was not bad. And to be fair, this book is not weird fiction, although there are definite nods towards horror-writer HP Lovecraft. Night Shall Overtake is pulp horror with a sprinkle of cosmic terror and a mystery on top.

While there were no misspellings, there were a few typos in this book. One word was replaced for another similar but incorrect word in some spots. Two women with similar names were mixed up a few times towards the end of the book, and that was pretty confusing. Also, the e-book had chapters but you could not access them from the kindle side bar which was annoying.

This book has a fun premise, solid pacing, and powerful ideas and descriptions. I highly recommend it and look forward to reading more by this author.